The highly revered shrine of Banke Bihari Temple in Vrindavan is one of the prime attractions of the city. Vrindavan, a small town in Uttar Pradesh is well known all over the world as Lord Krishna spent his childhood here. This temple is of great religious importance amongst the Vaishnavites. 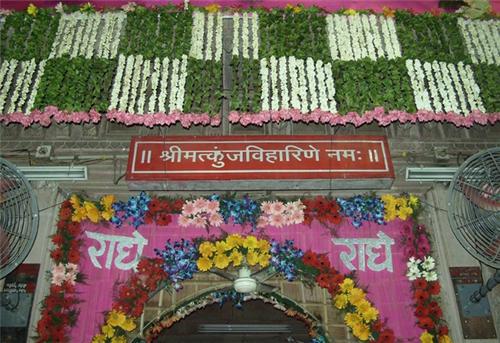 The temple was built by Swami Haridas in 1864. Originally worshipped at Nidhivan, the deity of the Lord is now in the main temple. The tribhanga posture of the Lord can be described by the word Banke which means bent in three places. Bihari means the one who is the supreme enjoyer. Earlier Haridas Swami worshipped this deity under the name of Kunj-Bihari which means the enjoyer of the lakes. In other words, Banke Bihari is the benefactor of pleasure and bliss. Here, the Lord is observed as if he is a child and thus, the services offered to him are in the style, as if, catering to a small child. Bihariji or Thakurji are known as the life of Vrindavan. He is the owner of everything. Swami Haridas Thakur brought the black wooden idol of the Lord from Nidhivan and all the services made to him are regarded as the ‘sewa’ of the Lord.

Swami Haridasji was born on Radha Ashtami in Haridaspur near Aligarh in Uttar Pradesh in1535 Vikrami(1478 A.D.). Their kulguru or family guru Sri Garhacharya visited Brij secretly for the naming ceremony of Krishna and Balram. Though some of Haridasji’s family migrated to Multan in Pakistan, his father Ashudhir settled near Brij in Aligarh.

While children of his age would play and read, he was more into meditation. It is believed that Swami Haridas was the reincarnation of Lalita ‘sakhi’ or female friend, the inner consortium of Lord Krishna. Though he was married at the right age to Harimati, he kept aloof from all worldly pleasures and diverted all his concentration to meditation. It is also said that Harimatji also followed the footsteps of her husband and prayed intensely only to enter the heavenly abode through the flame of a small lamp. One cannot therefore find any physical remains.

Upon reaching Vrindavan, Haridasji chose a secluded spot to enjoy eternal bliss and practice his music. This place is now known as Nidhivan. He chose this forested area Kunj as the gateway to Nirvana where he spent more of the time meditating and singing. One of the best ways he knew to attain Sadhna was through singing in praise of Lord.

The beauty of Krishna and Radha was such that no one wanted to lose the sight of divinity. Swami Haridasji wanted them to take a single form like Ghan (cloud) and Damini(lightning) thus giving a perfect metaphor to the combined beauty of dark Lord and his fair consort, Radhaji. He also wished his beloved Lord to be always in front of his eyes. The Lord granted both the wishes. The divine couple turned into a black charming idol which is the same as one sees in Banke Bihari temple. This Bihariji came into existence and the responsibility of which was handed over to Goswami Jagannath, principal disciple and younger brother of Swamiji.

Goaswami Jagannath was tendered the sewa of Thakurji by Swami Haidas and ever since, the sewa is performed by the descendants of Goswami. Unlike other temples, this temple does not have a Mangal Aarti( wishing Good Morning to the Lord) as the child sleeps till late in the morning. As Bihariji is worshipped in a different manner, the services can be classified in three different parts- Shringar, Raj Bhog and Shayan.

Shringar- During Shringar, the Lord is bathed, dressed exuberantly and decorated with jewellery, garlands and flowers.

Rajbhog- Thakur ji is offered Rajbhog in the forenoon which is a feast to satisfy the taste buds of a child.

Shayan- In this service, the Lord is made to sleep. There are melodious kirtans known as loris that assist the Lord to get a peaceful sleep. 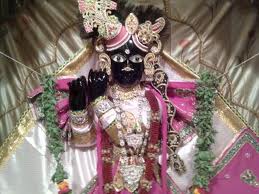 As against other temples, Banke Bihari Temple opens late at night as its believed that the Lord gets up late in the morning and plays at night. Once one goes in the premises of the temple, he/she will forget all the miseries and experience an eternal bliss.

The Lord is clothed and offered food as per the season and occasion; this is one of the main attractions of the temple. The months of Saawan (monsoon) have a special attraction. Entire temple is decorated with flowers and lights and is referred to as a Bangla that refers to the bungalow of the Lord. This sight is something that is unique and cannot be compared to any. Another fascinating thing about this temple is that it does not have any conch or a bell as it disturbs the Lord.

There are certain features that make this temple unique in true sense. Since Banke Bihari ji has a kind of magnetic appeal in his eyes, it is believed that if any one stares into the Lord’s eyes for a long time, he will lose his self consciousness. This is the reason why a curtain is made after every one minute. There is only one thing that is common with the other temples in Vrindavan and that is the chanting of ‘radhe radhe’. The Lord is in love with Radha Rani and that is why the devotees chant the name of Radha all the time. The structure of the temple reflects the true Rajasthani architecture. Even after almost 150 years since it came into existence, the Banke Bihari Temple has not lost its charm and attracts thousands of devotees everyday.

The birthday of Lord Krishna is celebrated with full fervor. The whole temple is decorated with lights and flowers. For this particular day, the Darshan of the deity is not allowed. It is believed that the Lord is in the womb of his mother. When the clock strikes 12 at midnight, the Darshan is allowed. It is only during the months of Phagun and Sawan that the altar of the Lord is brought out of the main shrine. Thousands of devotees gather here to get the ‘Darshan of Bihari Ji’. Janmashtami is the only day in the whole year when Mangal arti is performed in the temple.

During the Swing Festival of Lord Krishna, the deity is placed on a golden or silver swing and he enjoys the swings. The third day of the waxing moon is the main day of the Yatra. A number of solid silver ornamented and silver plated swings are shown at this time.

Akshaya Tritiya is the only day in the year that the devotees can see the lotus feet of the Lord. The deity holds the flute on only one day which falls on Autumn full moon day and on this day only he wears a special crown or mukut. On the last five days on the Phalgun month during the holi festival, Banke Bihari ji comes off his altar. It is only during these five days, that he can be seen in full view and enjoys with four gopis who are seen just at this time of the year.

Winters- Darshan from 8.45 am to 1 pm and 4.30 pm to 8.30 pm.
There is no entry fee for this temple. Easy connectivity from Mathura and Agra and Delhi makes it among the most thronged destinations at the time of religious importance and also on festivals and holidays.

Vrindavan is just 130 km away from the national capital of India, Delhi. It is easily connected to the rest of India via road, railway and airways. Once you reach Chatikara, you can take a shared auto or a rickshaw that costs no more than Rs 10 to reach this age-old temple that is located in Bihari Pura, Vrindavan.