Krishna devotees throng to the temple every year to partake of the divine bliss of celebrating the festival on the Lord’s own playgrounds.

Banke Bihari Temple Vrindavan epitomizes the purest form of worship to the Lord Krishna as its idol which was discovered from Nidhivan by Swami Haridas of the Nimbarka Sampradaya. Swami Haridas is the Guru of Tansen, the musical maestro who had adorned the court of the Mughal emperor, Akbar, as one of the Nine Ratnas or Nine Precious Gem. The idol had been discovered in 16th century while it was sanctified in its sanctum sanctorum in the temple proper in 1864. For sometime Banke Bihari was worshipped on his own in the temple and then later on a small idol of Radha Rani was added to the cameo and they are seen together till today in all appearances within and outside the temple precincts. 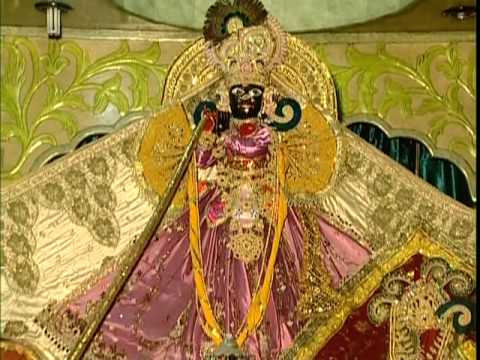 This temple has a unique ambience and quietitude all its own. It is said that Banke Bihari does not like the sound of bells or any loud sounds therefore these are prevented from entering the temple precincts at all times. Even the sound of the conch is avoided as for Bihariji this is a militant sound. Therefore, it is interesting to understand how the traditions of this temple emerged and it is one of the most solace providing temples of the entire Vrindavan temple complex. The only sound that vibrates literally around the nooks and crannies of the temple is the continuous chant of ‘Radhey Radhey’ as the devotees believe that the Lord loves to hear the name of his beloved constantly.

The Janamashtami festival at Banke Bihari temple is enough to turn the devotees delirious with joy and happiness. The entire temple is decked up with decorations, flowers and lights. Nobody is allowed to enter the temple sancta sanctorum and there is no ‘darshan’ or sighting of the Lord that day as he is believed to be sleeping in his mother’s womb and would make his appearance only at the stroke of midnight. The entire day and night are spent in kirtan and raas while the Prasad is distributed soon after the birth of the Lord. Cradles of silver and various other materials are decorated and hung in the temple and the children and dovotees swing the infant Lord all through the day a day after he is born.

Celebrations of the Holi festival are an amazing phenomenon at Banke Bihari Temple. The Lord himself comes out of the temple’s innermost chambers to give ‘darshan’ to the holi players in the courtyard. In fact all through the month of Phalgun which is when the Holi festival is observed that the Lord gives ‘darshan’ in the courtyards so that the devotees playing holi and arriving in their hordes can get a glimpse of the playful Krishna at his holi playing in the Banke Bihari Temple. 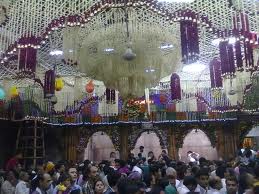 The Jhulan Yatra or the Swing Festival of the Lord is another festival that has elaborate preparations made and is looked forward to as a special treat by the devotees. During July August falls the month of the Hindu calendar called Shravana that marks the onset of the Monsoon or the rains after a long hot summer. The Lord celebrates this by having many swings in silver plated and solid silver hung all over the temple courtyard and the devotees swing the Lord gently as he enjoys the evening cool breezes and slight showers. On the third day of the waxing moon of Shravana the Lord is placed on a Golden Swing, also called his ‘Hindola’ and is visible for ‘darshan’ to all of his loved devotees. He is dressed resplendently and many a devotee simple stands gazing upon his beatific countenance. All though the month the Lord sits on his swing and gives darshan to his multitudes of devotees. 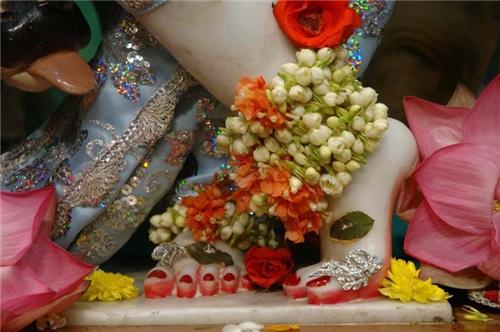 Akshay Tritya Festival is a rare festival that is symbolically celebrated by each of the devotees endeared to Banke Bihari Temple. This is the only day in the entire year when the beautiful lotus feet of the Lord are visible and having this divine ‘darshan’ is like attaining a lifetime achievement and makes himself or herself attain Nirvana literally for the devotees. Symbolically this is a day when it is believed that whatever is brought home lasts forever and ever. This is the reason that all the devotees who throng to the temple believe that they will forever be in the good graces of the Lord once they have had the ‘darshan’ of his splendid feet on this day. This is also the only day on which the Mangala Aarti of the Lord is held. Otherwise the Lord is allowed to sleep in late as Swami Haridas had believed that his Lord was a young playful child who needed his energies to play and should therefore not be raised too early in the morning.

Radhashtami or the Festival of Radharani is celebrated with great devotion and on this day the devotees especially visit Banke Bihari temple to request the consort Radha Rani to pass on their special favors to the Lord as it is believed that all requests that go through the Radharani are promptly answered. The devotees therefore pay obeisance to Radha on her birthday and request her to propitiate the Lord to favor them with his divine blessings.

Festival of Bihar Panchami is the the festival held to commemorate the day on which the idol of Banke Bihari was found by Swami Haridas from Nidhivan. This festival is held every year and devotees visit both Nidhivan and the temple to remember the divine day when the Banke Bihari had made his presence known and was then ensconced in the temple. Thus, this is a day of devotion and chanting of Radhaey Radhey all over the temple and the journey from the Nidhivan to the temple by the devotees.

These were the main festivals of Banke Bihari Temple which are held with an exceptional fervor and each year the devotees pay their humble respects to the Lord and take back with then the untold riches of blessings and divine grace to last them and all who come in contact with them for an entire life time.