There are a number of women rather thousands of women who are totally on the verge of suffering dehumanized living in Vrindavan because of the social ostracization and absolute desolation they are living through every day. They are the castaways of society and have been forgotten totally by those who had once been the very reason for their existence.

Many an old woman one may come across in Vrindavan has a tale to tell that is so unique in the experiences that she may have gone through that one holds ones breath. Yet the same tale is told with little variations here and there by thousands upon thousands of the women one may encounter silently begging on the streets of Vrindavan. One is appalled to read about and hear about the holocaust of the Nazi onslaught on the Jews but having a look at the misery writ large on the faces of the abandoned women one sees in Vrindavan one falls to deep thought about the levels of tolerance of the human race and the ability of certain people to inflict misery upon their fellow human being and yet continuing to live settled and calm lives all by themselves. 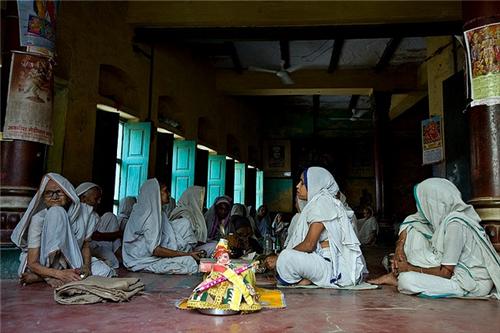 Lord Krishna had guided Arjuna through his sermon of being a ‘karmayogi’ when he asked him to just do his karma and not bother too much about the resultant. Similarly it is the underlying philosophy of Karma that keeps these silently suffering women quiet as they have taken it upon themselves to forgive those who have inflicted ignominy upon them and they have also given up all hope of ever coming out of their misery probably because it was written in their karma.

Shelters for Women in Vrindavan

Bringing these women out of their quiet acceptance of the position in which they have been placed is the task that several welfare organizations of Vrindavan have taken up in the past few decades. There are a number of government and privately run shelters for these women. However, it is reported that only about five per cent of women have been accommodated in these shelters and 95 per cent have been forced to sleep the night away in various nooks and crannies and some are even forced to sleep on the roads and on the river banks. There have been a number of instances of women who have been ignominiously cut up into pieces and put in a bag and given a burial or watery grave because there was no money available to cremate them as per the Hindu rites. Despite such gory tales there are also the more heart-warming instances where various donor agencies have come forward to be able to give the women some kind of succor from their suffering.

Programmes and Policies for Women Welfare in Vrindavan

Several politicians and opinion leaders have done their best to be able to get a legislation passed to enable the women to get some benefits from the government coffers. Even the Sulabh International Chief had moved the courts to get some kind of a monthly stipend for these 20,000 odd women to enable them to live a decent life and also arrange for a decent cremation when they finally died and went to meet their maker. The Sulabh group has come forward to give a stipend of Rs 2000/- per month to some of the widows that it has taken up under its social welfare programme. Similarly the Mukund Mahila Sadan has also charted out a programme whereby each widow is given certain supplies including Rs 2000, in cash to be able to take care of her minimal creature comforts every month.

Thus, with these welfare activities are also enjoined the ongoing programmes of donors who keep on distribution chains of various items ranging from cooked food, food grains to clothes, blankets and even training programmes to enable the destitute women to become empowered enough to stand on their own feet. The welfare organizations have their hands full. Firstly they have to help these women regain their dignity and self esteem and then they have to help them obtain gainful employment to keep them occupied and able to earn for themselves. Maybe some thought could also be given to rehabilitation programmes where the women could be reunited with their families or could be made member of to their families where they could be give their respectful due.