Hare Krishna Hare Krishna, Krishna Krishna Hare Hare
Hare Ram Hare Ram, Ram Ram Hare Hare
The Mahamantra is simply an address to the Lord and His energy. It is impossible for the Lord to forget such a devotee. It is clearly stated in this verse that anyone who addresses the Lord immediately attracts the attention of the Lord, who remains obliged to him (Nectar of Devotion Chapter 21). Mantra means a verse that is delivered from the influence of mind and considered to be the one and only ultimate process for attaining self-realization in this age of Kali-yuga. 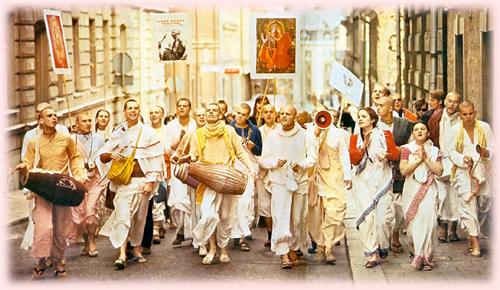 The life cycle of the earth has been divided into four yugas that run like the four seasons. The Satya-yuga, Treta-yuga, Dvapar-yuga and the Kali-yuga. These millenniums become short in duration and the human qualities become more degraded and as the Bhagavad Gita describes, the Kali-yuga lasts for 4,32,000 years, five thousand years of which have already passed away. Previous to the Kali-yuga, different methods were provided to the people to attain God-consciousness. In the Satya-yuga, elaborate fire sacrifices and in Treta and Dvapar-yuga, elaborate deity worship in temples was prominent. However, the people of this civilization in Kali-yuga are fortunate to avail a concession. The sacrifice that one can now offer is the Sankirtana Yagya or the chanting the Holy names of the Lord.

Although God is very powerful and has numerous names, the Mahamantra contains the principal names to address the Supreme and, thus, is the greatest of all Mantras.

"Krishna’ means the all-attractive and because God has all the opulence’s in full - Beauty, Fame, Strength, Wealth, Knowledge and Renunciation - He has the ability to attract all living beings to His association."

"‘Rama’ means the reservoir of all pleasure and since every living entity by constitution is pleasure-seeking, they can only satisfy this propensity when directed towards the Supreme Lord."

"Hare refers to the pleasure giving energy of the Lord, personified in His eternal consort – Srimati Radharani, only through whom can we attain the favour of Lord Krishna. Because Krishna is absolute, His names and Himself are non-different, and Krishna’s full presence can be perceived by purely chanting the Mahamantra. Because Krishna is the supreme pure by His association we can cleanse away all material contamination from the heart enabling us to taste the full nectar of the holy names, and upon re-awakening our dormant love for Him, we can return to His eternal abode in the spiritual realm." 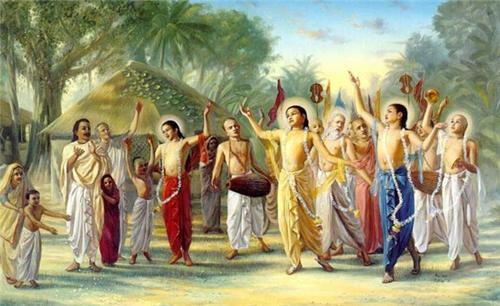 How To Do Harinam Sankirtan

Harinam is the congregational street chanting of the holy names of Krishna or God. The Harinam Chanting can be done in two ways - Saying the Mantra to oneself also called as Japa and singing the Mantra in the form of Kirtan (which is usually done in a group). As one chants, the names must be pronounced clearly and distinctly. It is obvious that your mind will wander many times, but at such times, you need to bring your concentration on the Lord’s names once again. Chanting is a prayer to Krishna that means “O energy of the Lord (Hare), O all-attractive Lord (Krishna), O Supreme Enjoyer (Rama), please engage me in Your service.” The more sincerely and attentively and you chant these names of God, the more spiritual progress you will make.

Lord Chaitanya stressed that the chanting of the Hare Krishna Maha-Mantra Hare Krishna Hare Krishna Krishna Krishna Hare Hare Hare Rama Hare Rama Rama Rama Hare Hare is the easiest means of self-realization. He was the one who started Harinam Sankirtan on the streets accompanied by musical instruments. This loud congregational and public chanting attracted many followers. Along with the chanting, He also taught the devotees how to gracefully dance along the kirtan. According to Him, when one dances and chants, he becomes absorbed in the sound vibrations of the Mahamantra. Now, the Manta enters his consciousness and purifies him. Other onlookers, passers-by, plants and animals also reap the benefits of the auspicious affects of the mantra.

Following the footsteps of Lord Chaitanya, the devotees chant and dance on the streets and the temples in Vrindavan hold Kirtans to give a chance to the souls to hear the holy Mantra and get benefited from hearing the holy names of Lord Krishna. As Lord Chaitanya said, “There are no hard and fast rules for chanting Hare Krishna”.

A person can chant these holy names at any time and any place. But setting up a specific time of the day is best. Ideal time is early morning hours. It is believed that Lord Krishna is no different than His names. Therefore, His names and He Himself are identical. When one chants the Holy names of Lord Krishna and Lord Rama, he becomes directly associated with Him and gets purified. As per the Vedas, Krishna dances on the tongue of His devotees who chant His name.

When one wishes to chant alone, it can be best done on the Japa Beads that are available at various temples such as ISKCON. Each strand of the Japa Mala contains 108 beads and one large bead. The Japa is started from the head bead and ends at that head bead only. This completes one round. The initiated devotees take a vow in front of their spiritual masters to chant 16 such rounds every day.

His Grace Srila Prabhupada - the Founder of Hare Krishna Movement 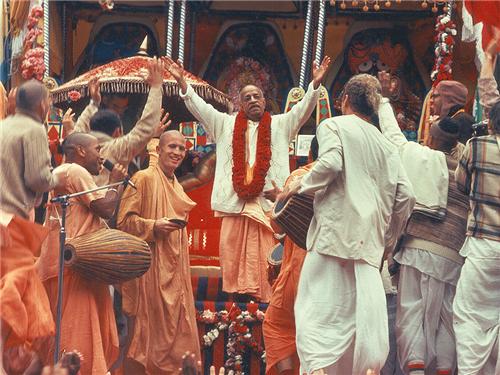 Harinam Sankirtan was brought by Srila Prabhupada to the streets of cities, towns and villages around the world. Devotees come out in groups and perform Harinam Sankirtan on the holy roads of Vrindavan and other cities and spread the air of spirituality and do their part of paying obeisance to the Almighty, Lord Krishna. No doubt, Vrindavan is Home of Harinam Sankirtan as one can hear the Sankirtan taking place when one rises up at around 4 am and even at the time of sleeping at around 11 am, no need to mention during the whole day. There are many groups of people who sing the Harinam Sankirtan 24 hours a day and glorify the Lord in every possible manner.

People from all communities, castes and groups from different parts of the world are bound together in Vrindavan with Harinam Sankirtan. Many have left their homes and started their life afresh in Vrindavan, where His mercy is bountiful!