Vrindavan Chandrodaya Mandir is the majestic temple-structure which would soon glorify the Krishna devotion in a grand manner. The luxurious temple-complex is planned to be set up in Vrindavan, one of the most pious lands for the Hindu devotees in India. Conceptualized by the founder of ISKCON Acharya Srila Prabhupada, the Rs 300-crore project has a total area of 5,40,000 sq ft and a magnificent height of about 700 feet (213 meters, 70 floors). The temple has the footprint of a huge five acres. The temple complex is planned to have the most extraordinary inner and outer decoration with twelve lush green forests of different varieties of vegetation including several gardens like the one connected to Shri Krishna himself as his Leela-Kshetra (play-ground). Moreover, there will be lakes, artificial hillocks and almost everything that would reanimate the Krishna era described in the great Shimad Bhagavatam and all other resources of Shri Krishna’s life in Vrindavan.

The Concept of the Temple

The concept of installing such a grand Krishna Temple complex was gestated by Srila Prabhupada way back in 1972. He made a wish that a ‘skyscraper building’ for Shri Krishna to be set up in Vrindavan during his lecture session about the principle of Yuklta Vairagya right in front of several Indian as well as foreign disciples in Vrindavan. According to him, building such a tall and elaborate temple would lead to purify the material activities of humans. And then the devotees of ISKCON contemplated the idea of installing a skyscraper worship complex for Shri Krishna in Vrindavan. On 16th March, 2014 on the auspicious day of Holi the ceremony of laying the Foundation Stone took place. The work is hoped to be finished within the span of next five years.

This unique skyscraper temple-cum-heritage project was conceived by the devotees of ISKCON-Bangalore. It will have a grand temple of Lord Krishna at its centre and the iconic structure shall be an amalgamation of both Indian temple architecture and modern architecture. The temple has been erected on a land of 5.5 acres and rises to a height of about 700 feet (213 metres or 70 floors). The temple is planned to be vibrant with festivals and religious activities throughout the year.

To give it a natural look, the temple will be surrounded by lush green lookalike forests of Vrindavan. The temple will consist of the twelve forests (dvadashakanana) of Braj, with varieties of lush vegetation, flower laden creepers, lakes with lotuses and lilies and water falls and hillocks that will transport pilgrims to the times of Sri Krishna as described in Bhagvad Gita. It also encompasses a heritage museum that will display the rich heritage of  Sri Krishna. An elevator will take visitors from the ground level to 700 ft high to give one a wonderful view of Braj Mandal. 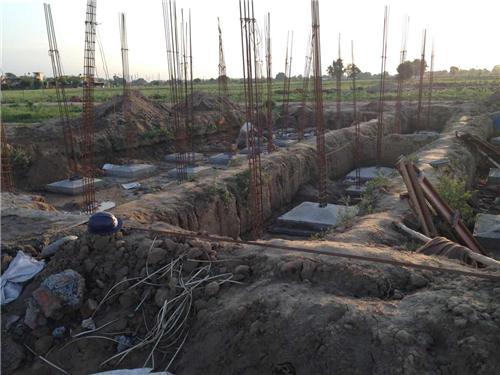 The design of the complex structure was made by a US-based company named TRC Worldwide Engineering Brentwood. The structural design plan was done by the Department of Civil Engineering, IIT and a New Delhi-based company Sanrachna Consultants. The main architects were hired from the Ingenious Studio Pvt Ltd. and the heating, ventilation and air conditioning (HVAC) are to be done by Gupta Consultants & Associates. The landscape designing will be brought out by the Quintessence Design Studio.

The temple complex would have a mixed design of both modern and traditional Hindu temple architecture. It comprises of five essential segments: Vrindavan Chandrodaya Mandir, Krishna Heritage Museum, Krishna Lila Park, Krishna Kutir Retreats and Krishna Vaas. Apart from these, the complex would contain several other attractions related to Shri Krishna and his extraordinary life. 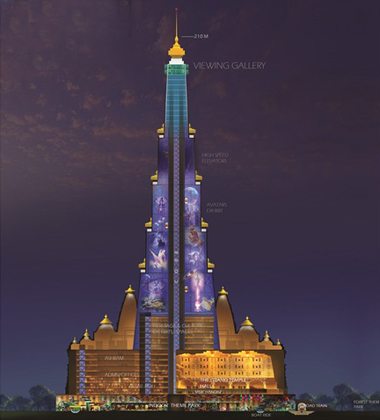 According to the final design of the main temple, a capsule elevator would transport the devotees and visitors through a recreated planetary system to the top of the temple where there will be a viewing gallery for the visitors to experience a magnificent Braj Mandal Darshan. The twelve lush forests of the Dva-Dasha Kanana comprising numerous flower and fruit bearing vegetation, singing birds, beautiful lakes-a completely serene and scenic environment that recreates the life and time of Shri Krishna would be there to be explored by the visitors. The complex would have a Helipad, a museum which would showcase the greatness and richness of the Vedic literature, astrology, etc through light and musical shows, a canteen for food and beverages, 12 acres dedicated parking place, accommodation facility for the visitors, telescopes placed on the top of the building to catch the view of the whole Vrindavan and many more such attractive features to behold.

Various festivals related to Shri Krishna will be held at the temple-complex throughout the year like Jhulanotsava (Swing Festival), Rath-Yatra (Chariot-Festival), Naukavihar (Boat-riding festival), Kunjavihar (Forest festival) etc. The temple authority would perform several charity programs like Akshaya Patra mid-day meal for the economically wretched children from the state, various programs for the widows of Vrindavan, etc. all year through. Most importantly, they have technical plans to restore the River Yamuna to her past glory.

The idea of Vrindavan Chandrodaya Mandir is to bring back the old glory of Krishna Mahatma (greatness of Krishna) as well as the rich heritage of our culture, literature and to get everyone associated with the temple involved in social activities in order to maintain the human material and spiritual balance.