Shree Radha Ras Bihari Ashta Sakhi Mandir in Vrindavan was built centuries back and is the only temple in the country that is devoted to the heavenly couple and eight friends of Radhaji - Ashta Sakhi. The sakhis were involved in the love play of Radha and Lord Krishna.The mention about eight friends of Radharani was found in the epic books Ramayana and Bhagvat Gita. It is also called as “Lila Sthan” of Lord Krishna. 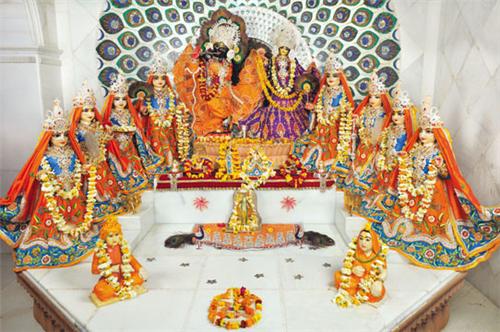 Shree Radha Ras Bihari Ashta Sakhi Temple Vrindavan was named on the divine love of Radharani and Lord Krishna. It is situated near Banke Bihari Temple of Vrindavan. Some legends say that Shree Radha Ras Bihari Ashta Sakhi Temple is among those places of Vrindavan where Lord Krishna still resides and enjoys Ras Leela with Radha and sakhis. Some devotees also claim that they have heard sounds of anklets, tunes of a flute at nights near those temples.

The temple architecture is very commendable and it is done by skilled craftsman. Some of the craftsman is from the team of people who worked on Taj Mahal.The temple has beautiful stone carvings and semi-precious stone collection. The stones were brought from different corners of the world. The temple is built in such a way that is describing the feisty nature of Krishna who is also called as the lover of beauty.

Inside the temple one can see the divine deities of Radharani, Krishna and the eight sakhis of Radharani dressed in glittering attire and which are changed daily. Wardrobe of the divine couple and eight sakhis consists of various dresses and jewellery and makeup of all of them is a daily routine which takes three hours before starting the daily pooja. The pooja in the temple is performed daily in a traditional and ancient method by the poojaris of the temple. Krishnaji portray here as the spirited and loving Dark Lord.

There is no entry fee to this temple and it remains open throughout the year. This temple remains open every day between 5:30 am to 08:30 pm and timings are as follows:

From Holi to Deepavali:

From Deepavali to Holi

The place is 10 km away from Mathura where you can hire a cab and can easily visit Vrindavan in a day trip and for night you can stay in a hotel in Mathura. It is 2 minutes away from Banke Bihari Temple which is a distance easily covered by walking.

From Yamuna Highway take an exit towards NH2 by turning left. Again, take a left towards UP SH 84 and continue onto Lane Ganj Road.Now, turn towards right onto NH 91. Turn left onto SH29 and go through 1 roundabout. Turn right onto MDR 26C and move left to SH25.Continue onto SH 29 and take a right turn and then again take 1st right turn.Turn towards your left and your destination temple will be on your left.