One of the oldest holy places in Vrindavan, Sri Radha Damodar temple was built in the year 1524 by Srila Jiva Goswami. Aesthetic in design and impressive architect is very stunning and spiritual in look. People from all across India to see this temple and take blessing of lord Krishna. 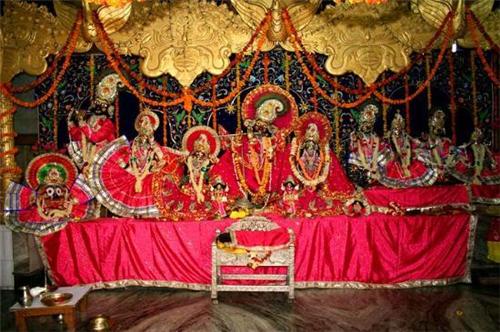 History of the Temple

Some followers feel that the deities of Radhadamodar in the Radhadamodar Temple in Vrindavan are not the original deities of Srila Jiva Goswami. However, this is not a fact. When Aurangzeb invaded Vrindavan and destroyed several temples and idols, the deities were moved to a safe place in Jaipur and kept there under the protection of the Rajput Kings. Like the otehr deities of Gopinatha, Madan Mohan and Givindadeva, the idol of Radhadamodar was too kept in Jaipur. They were later shifted back to Vrindavan and worshipped since. The deieties which temporarily replaced the orginal ones were known as pratibhu murtis and were worshipped by the gooswamis in place of the original ones. It is important to note that the idol of Damordarji in Jaipur is smaller than that in Vrindavan thus confirming that the deity of Vrindavan is currently worshipped in the original one.

Before the disappearance of Sri Jiva in 1596, he left his deities in the care of Sri Krishna Dasa, his successor, the head pujari. The present sevaites are directly coming in line from his descendants.

In this highly spirited temple, there is Govardhan Sila which was provided by Lord Krishna to Srila Sanatan Goswami and he bought this Sila to Vrindavan and placed in this great Sri Radha Damodar temple. Many devotees visit this temple to do parikrama everyday to take blessing. During Kartik season, just the day after Diwali, is celebrated as Annakut Mahotsav in which Giriraj Sila is placed out from the main alter (Garbh Graha) for devotees Darshan. 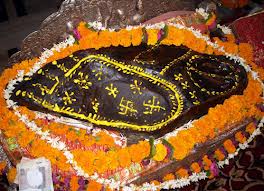 Raajbhog Seva is offered with rice, chapati, sweet rice, daal, ghee for aarti and other delicious food. In Sandhya Dhoop Seva, fruits, Mishri, Makhan, dry fruits, kheechadi seva and other sweets including ghee for aarti is offered. Sandhya aarti Seva is performed with aarti. Shayan Seva is performed by offering Puri Chapati, two types of delicious sabji, halwa, sweets, perfume seva and ghee for aarti. During Abhishek Seva, sevak or main priest bath deities with cow milk, curd, ghee, sugar powder, honey and later this is distributed among devotees as Charnamrit. Poshak Seva is performed by offering regular dress, festival dress and night dress to deities. In Sadhu Vaishnav Seva, services are offered to Sadhu or saints and Bhandara for devotees. Aarti is performed seven times a day throughout the year in this temple.

How to Reach Sri Radha Damodar Temple in Vrindavan

It is situated at Loi Bazaar in Vrindavan. From Chatikara, head towards Bhaktivedanta Swami Marg and turn left to Parikrama Marg and there is Sri Radha Damodar. There is easy connectivity through autos, rickshaw and other public transport. Rickshaw fare is Rs 10 which is affordable and convenient.