Sri Madan Mohan temple is built by Srila Sanatana Gosvami near the Kali Ghat in Vrindavan (Uttar Pradesh). This is one of the ancient temples Vrindavan and hence it is divine in nature. Another temple of Sri Madan Mohan is built many years later in Karauli (near Jaipur) in 1917. During Aurangzeb reign, when he was destroying all sacred temples and their deities, many prominent deities were taken off to other location in India for safety and protection. In the same period, original Madana Mohana deity was taken to Karauli in Rajasthan for safety during the attack. Today, a replica or pratibhu-murti of the image is worshiped at the temple. 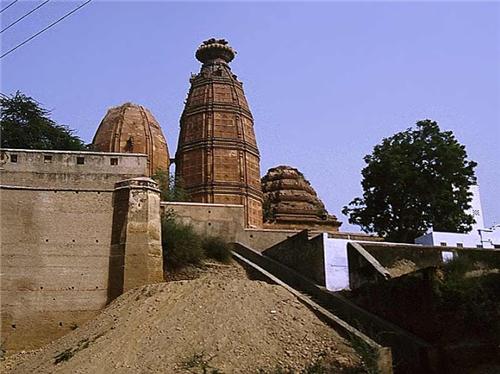 It is believed that in ancient age, Advaita Acharya noticed and unearthed the main Madana Mohan deity from advaita vata tree base in Vrindavan. He discovered this deity where he regularly go for yajna and bhajan (prayer). Going with years, Advaita Acharya teached and handed the responsibility to worship Madan Mohan to Purusottama Chaube, who then passed it to Sanatana Gosvami. Radharani and Lalita are also worshipped in this great temple from years now. Purusottama Jena had sent them to this holy land of Vrindavan.


History of the Madan Mohan Temple

History of Madan Mohan temple actually traces back to 5000 years ago during the time of king Vajranabh (Great Grandson of Krishna) who firstly established this temple along with few other temples in Vrindavan. But during the course of time the temple disappeared. As per the historical records, it was built in 1580 by Kapur Ram das, a trader of Multan under the guidance of Sri Sanatana Goswami. Later in 1670 during the invasion of Mughal Ruler Aurangzeb the original deity of Madan Mohan was secretly moved to Jaipur for safekeeping where it was worshipped for many years. Later when the princess of royal family of Jaipur was married to the prince of Karauli, she took the deity along with her to Karauli and since then it’s established and worshipped in Karauli. During the attack of Aurangzeb on Vrindavan the spire (Shikhara) of the original temple was dismantled. So, a new temple was built next to it down the hill in the early 19th century (year 1819) by Sri Nand Kumar Bose of Bengal as the old temple was unfit for worshipping.

The Pratibhu Vigrahas (replicas) of the original deities are worshipped in this new Madan Mohan temple. It is believed that Saint Advaita Acharya found the original idol of Sri Madan Mohan under the old Banyan Tree (Advaita Vat), when he visited Vrindavan. He gave the idol to his disciple Purushottam Choubey (Mathura Brahman) for worship, who in turn gave the idol to his follower Sanatana Goswami who installed the idol on Dwadashaditya hill under a tree and worshipped the idol for many years. Later on Kapur ram Das, a wealthy merchant being influenced by the powers of Sri Madan Mohan, built a temple at the place commemorating the deity.


Architecture of the Temple

This temple is artistically carved in oval shape from above with red stone located at Aditya Tila. The temple height is 20m high and is present near river Yamuna. This amazing temple is financed by Ram Das Kapoor of Punjab. He was great follower of Sri Madan Mohan Jee. In the early 19th century, Sri Nanda Kumar Bose built new Madana Mohan Temple. Main pujari or care-taker of old temple moved to this temple as it is believed that the old temple was contaminated. This temple now has the replica structure of the original deities or pratibhu murtis. 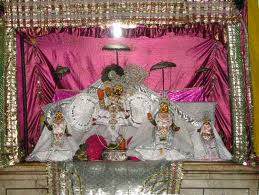 Every day “Anga Kadi” which is very famous and favorite of Lord Krishna is offered here. It is believed that saint Sanatana Gosvami started this food to offer Lord Krishna because he was saint and didn't have much to offer. He used to collect gram and wheat flour from Mathura or nearby surrounding area. With this he used to make ladoo, which he then cook and present as offering to lord. Even today food is prepared in the same manner to offer Madana Mohan.

This temple remains open throughout the year and many prominent festivals like Kathik, Sharad Purnima, Govardhan Puja, Srila Prabhuapad Tirobhav, Gopaastami, Devotthan Ekadasi and many others is celebrated with full devotion and harmony.

Mangala Aarti is performed at 4:00 am only during Kartika month (Oct-Nov). To visit this temple, please note the Darshan timing:

This temple is situated between Krishna Balarama Mandir and Loi Bazar, near Vrindavana parikrama path, which is about a half kilometre from Kaliya Ghata. To reach this place, turn left onto Bhaktivedanta Swami Marg from Chatikara and head toward left and then right, there Sri Madan Mohan temple is situated.