The religious site of Vrindavan provokes piety, gratitude and homage from the devotees who in their exalted state of joy are happy to be of some service to their lesser favored fellow human beings. Several of the devotees thronging to the pilgrimage are willing to share their bounty with the marginalized and less fortunate of their brethren. 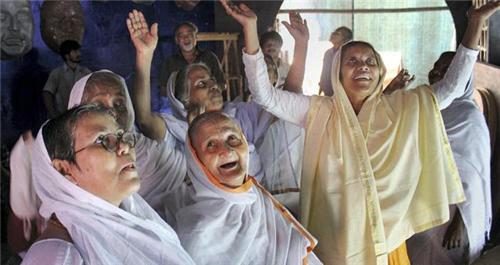 The social welfare organizations focused on the care of the poor and destitute are many and diverse in Vrindavan. They are focused on the welfare of the destitute women on the one hand and the upkeep and maintenance of the orphans of the world on the other. It is not just people who may have decided to stay on here at Vrindavan or children who were separated from their parents in the streets of Vrindavan that dwell in these welfare institute. Actually people from all over the world gravitate towards the holy city as they have been guided by a divine hand for there are several institutions devoted to the selfless care of these people who have been torn asunder from their worlds of care and loving.

The influx of the poor and helpless to Vrindavan happened in several waves. The widows of Bengal had a tough time living in their homes and in times of drought and famine they were the first ones to be set adrift either at railway stations or abandoned near Vrindavan. When they could not fend for themselves they would be forced to beg on the streets of Vrindavan to eke out their survival. The second wave of influx of people to be taken care of happened when there was a great drought in Maharashtra and Gujarat in 19th century that left hundreds of orphaned children. Some kind hearted souls like Lady Northcote formed the Northcote Trust and with the help of a few Vaishnava friends who later helped establish the Lady Northcote Hindu Orphanage. 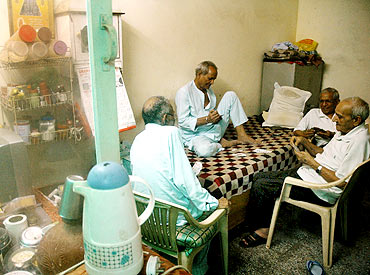 Over the years this emerges as a Gurukul, imparting education to the boys according to their needs. This was indeed a major step as many of the boys have graduated from there and as men have begun working on lucrative jobs. While there are a lot of such young graduates who are doing humble services for the main temples of Vrindavan quite a few have also been absorbed into the Bhaktivedanta hospital. The placement of these scholars from Gurukul is no big task as they have gone on to head temple establishments as far away as Pune as well. A larger proportion of them have, nevertheless, been absorbed into Vrindavan temple mainstream where they have been given several responsible jobs.

Along with the care of young orphans, Vrindavan society has on offer some carefully laid out facilities for the aged and infirm as well. The Bhaktivedanta Old Age House or the BVCH in short has the vision of providing peaceful existence for the senior most members of the ISKCON movement. This is final resting area where the elderly devotees rest and devote all their time to worship the Lord. It is here that the elderly devotees come to spend the last days of their life giving up fully to the passionate love for the Lord and to pay their final obeisance and virtually give up their mortal remains in the very haloed land of the Lord. The elderly people can concentrate all their energies in devoting full time to the service of the Lord instead of worrying about how to take care of themselves and how they can prevent themselves from becoming a burden on their kin.

There is also an ingenious concept developed by Sadhvi Rithambra who had created a project for the care of the orphans as well as the widows in one continuum. Her project was given approval and about 17 hectares of land was allotted to her in 2002 on a generous lease of Re1/- a year. The Vatsalyagram model of social welfare unit for children and destitute women established there is one of its kind and can be used as a prototype for establishing other similar units elsewhere. The principles of the welfare unit are simple the orphaned children are given to the women as their own so that almost every child in the unit has a mother or grandmother to take care of them. This principle helps the women find an occupation and also keeps them away from the streets. Similarly the children too are owned and have a sense of responsibility towards their mothers.

Thus, the entire Vatsalyagram or literally ‘Village of Affection’ is an old age home, orphanage and women’s shelter rolled into one. The management and running of the centre, however, is unique and very different from the stereotypic institutions. At Vatsalyagram each child has a mother or a grandmother and each member feels that he or she belongs to a family. Each mother figure is attuned to the needs and everyday routine of her wards and just as equally the ward is also totally committed to the well being of the mother figure. These bonding affections are everlasting and many a times the mother and the child never let on that they were brought together at the centre but were actually naturally bonded together by divine accord. Several matches are also made here and the marriages of the children celebrated with great gaiety and pomp. The simple guiding rules of family life apply here were everyone takes care of themselves and everyone else as well. There is no competition and therefore the life there is smooth and progressive.

There have been several sad instances of elderly people being abandoned by their kin and left to fend for themselves. Therefore, there a number of organizations that are interested in establishing old age homes in Vrindavan. One of them is Shri Haridas Bihari Vridh Ashram that is coming up near the Sukhda Ashram located in the Moti Jhil area. The old age home shall provide for its inmates all the comforts of home in the sense that they would get healthy, nutritious and hygienically cooked food, comfortable accommodation and medical care for a minimum fifty inmates. There are plans to further
expand the facilities in the coming times.

These old age homes, orphanages and other social welfare centers are working full time but there is need for several more to take care of the influx of population pouring in every year to this holy township. There is also the need for increasing educational and skill building facilities which are also coming up gradually all around the holy city of Vrindavan.