Seva Kunj, also known as Nikunj Van (forest), is located in Vrindavan. Vrindavan is a city which goes synonymous with the life of Lord Krishna. It is a town in Mathura district where according to Mahabharata, Lord Krishna spent his childhood. It is one of the most important Hindu pilgrim point. The place is known as Seva Kunj because Lord Krishna used to do seva (selfless service) of Radha and helped her get ready for Raas Leela (a holy dance).

Seva Kunj was discovered by Swami Hit Harivansh in 1590. Followers of his sampraday maintain this sacred site and offer daily pooja seva to the presiding deity. It has a beautiful temple dedicated to Radha Krishna which is also known as Rang Mahal, where Radha and Krishna used to perform Raas Leela along with other gopis of Vrindavan. The temple’s walls are decorated with paintings of various leelas performed by Shri RadhaKrishna. Each painting depicts different aspect of Radha and Krishna. One of the painting depicts Krishna combing and decorating hairs of Radha. In another painting, Lord Krishna is massaging legs of Radha after she is tired of Raas Leela. Other paintings depicts RadhaKrishna playing Holi and in one Krishna is enthralling Radha while playing flute. 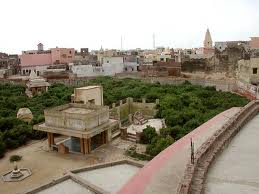 A little distance away from Seva Kunj is sacred Lalita Kund, which is believed to have been constructed by the flute of Lord Krishna to quench the thirst of Lalita Devi, friend of Radha. Just north of Seva Kunj is Imli Tala. It has a very old tamarind tree which had existed since the time of Krishna. The tamarind tree lies in the courtyard of a Radha-Krishna temple which was built by Maharaja Bhakti Saranga. Lord Krishna used to sit under this tree and his body would turn into gold after ecstatic separation from his most beloved devotee, Radha.

The city is best seen during Janmashtami, Holi and Radhaashtami and is lavishly decorated on these occasions.

How to Reach Seva Kunj

Seva Kunj is just 2.1 km from Vrindavan. Below are the possible ways to reach Vrindavan.