Shree Radha Raman Temple is the ancient temple of Vrindavan (UP). This temple like most of the temples of Vrindavan is dedicated to Lord Krishna. This amazing temple is the emblem of Lord Krishna's love for Radha. Constructed around 1542 on the request of Gopala Bhatta Goswami. He is one of the six Goswamis (disciples) who followed Sri Chaitanya Mahaprabhu. 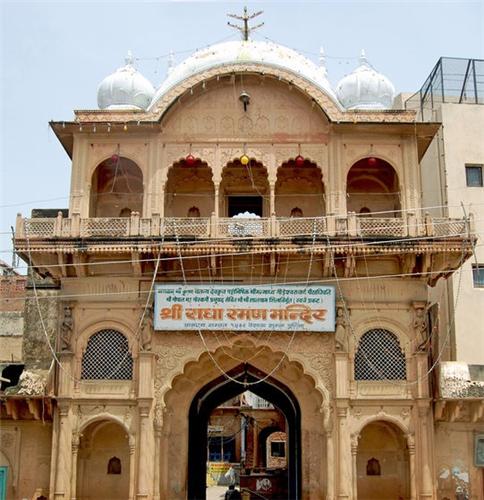 In this immemorial temple there is still presence of original Saligram of Lord Krishna which is present along with Radharani. It is believed that these Saligrams which was twelve in count was collected when Gopala Bhatta Goswami visited Nepal and bathed in Kali-Gandaki river. And later when he returned back to Vrindavan, out of these twelve Saligrams Silas, one fossilized saligram turned and emerged in a perfectly shaped Lord Krishna deity. During full moon day in the month of Vaishaka (April-May) in 1542, this deity was placed along with other Saligrams Silas. Later when Gopala Bhatta Goswami died, his samadhi constructed inside the same complex. Unag vastar of Shri Chetanya Mahaprabhu is also kept inside this temple which is very rare thing. This day is celebrated every year by bathing deity and Saligrams with milk and various other items which is followed by prayer.


A deity of Radharani is not worshiped in this temple because the deity of Radha-Raman is self-manifested and there was no deity of Radharani self-manifested. The present temple was built in 1826 at the cost of eighty thousand rupees by Shah Behari Lallji from Lucknow, the grandfather of Shah Kundan Lall and Shah Fundan Lall, who built the Shahji Temple. Sri Chaitanya Mahaprabhus kaupina (cloth) and asana (seat), which Gopal Bhatta Goswami brought from Jagannath Puri, are also in this temple. The asana is black wood and is about 31cm (12) by 25cm (10). They are brought out to be seen by the public for six days a year. They can be seen on Gaura Purnima, the appearance day of Radha Raman, the actual day and day after the disappearance of Gopal Bhatta Goswami, Janmasthami and Nandotsava (the day after Janmasthami). There is a daily abhiseka of the asana with Yamuna water. There is no decay of the asana or any cracks, even after 450 years. For the raja bhoga offering, Radha Ramans pujaris first offer all of the bhoga (food) to Radha-Raman and the shalagrama shilas, and then they make a second offering to Srimati Radharani, and then a third offering for Gopal Bhatta Goswami. There are not three different plates, but the same plate is offered in the order above. The fires for cooking in the temple kitchen have been burning continuously for over 440 years, since the Deity was installed. This is so no foreign elements, such as matches, are used for ignition purposes. Before the present temple was built, there was another temple at the same place that is now the kitchen and prasadam area for the present temple.

Gopal Bhatta Goswamis Samadhi is to the left, after you enter the first gate from the street into the temple compound. After entering the temple compound you turn left and walk fifty metres (150 ft). He passed away at the age of 85, in 1596, exactly 100 years after the appearance of Lord Chaitanya. His disappearance day is celebrated in the month of Shravana (July-Aug) on the Shukla Panchami (5th) day. There are also smaller samadhis here of the previous sevaits (priests) of Radha-Raman. There is regular worship at this samadhi. Daily bhajans and kirtanas are chanted and the Srimad Bhagavatam is recited. Twice a day a full plate of Radha-Ramans maha-prasada is offered. They also offer him fresh drinking water. In a separate kitchen, five bhoga (food) offerings are prepared and offered to Gopal Bhatta Goswami. After the offerings, five aratis are performed. After the last arati of the day, Radha Ramans pujari give Radha-Ramans maha flower garlands to Gopal Bhatta Goswami. In the area of the present Radha-Raman Temple, there used to be a lake connected to the Yamuna River. 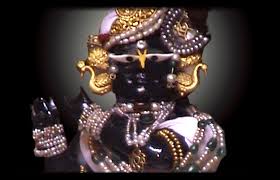 One can witness thousands of devotees throughout the year. Many festivals are celebrated in this temple like Rama Navami, Chandan Yatra, Jhulan Yatra and many others. Rama Navami is celebrated in Chaitra month (March-April). Chandan Yatra is celebrated in the Jyestha month (May-June) and continue for 21 days. In this festival, deities are covered completely with Chandan (Sandalwood) paste to relieve god from scorching heat. Another festival is Balaram Purnima which is celebrated at the end of Shravan (July-August) month. In this festival, Balaram who is Krishna's elder brother along with lord Krishna is worshiped by offering new outfits, blog along with other spiritual things. One festival which is very famous is Jhulan Yatra which is alos called Swing festival and celebrated at the start of rainy season in Shravan (July-August) month. In this festival, deities are placed in gold-plated swing and people perform dance and offer prayer.

Next comes, Shree Krishna Janmanshtami in which Lord Krishna is bathed with milk which followed with Abhishek, blog, prayer and aratika which take place at midnight. Thousands of pilgrims visit temple on this day and actively participate in the festival. Just after 15 days later, another festival is celebrated and that day is called Radhashtami. In this day devotees perform a half-day fast, which is followed with Radharani's abhishek and amazing feast.

Kartika is another major festival which take place in October – November month. In this entire month, devotees offer lamps to the lord Krishna and offer prayers and bhog. In the Phalguna (feb-March) month, Gaura Purnima is celebrated in which Chaitanya Mahaprabhu is appeared. Many beautiful outfits are offered to lord and this day is also marked the last day of the famous Holi celebrations which took place in Vrindavan. 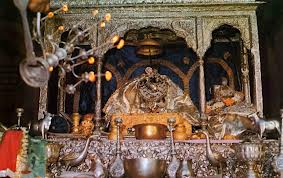 In this holistic temple, there is medical welfare society, Free education facility, dental charity and many more which is made especially for devotees. This temple is situated at Keshi ghat in Vrindavan. There is easy connectivity from city to this temple. Various mode of transport like autos, rickshaw, sharing autos and private taxis are available. To reach this temple from Chatikara which is at 13.5 km (approx) distant, head toward south-east (NH2 highway) and turn towards Bhaktivedanta Swami Marg. After that turn left onto Parikrama Marg which to be followed with another right and then left and there is situated this long-lived Radha Raman temple.