The holy land of Vrindavan preserve the sacred and divine love of Radha and Krishna. Radha Vallabh Temple is one emblem of this love. It is the oldest and long-lived temple which was constructed in 1585. Sundardas Bhatnagar got permission from Akbar's court (the ruler at that period) to construct this temple. It was founded by Goswami Hit Harivansh Mahaprabhu. 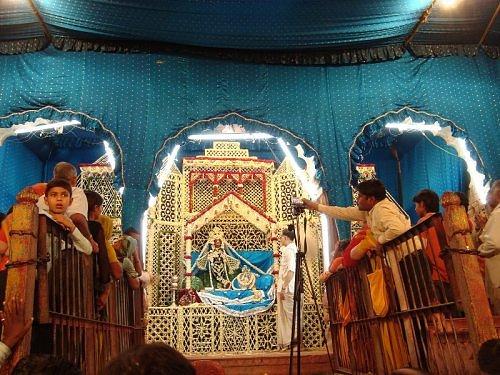 This ancient temple is living dialogue between Hinduism and Islam in Medieval Architecture. This majestic temple is built with red sandstones which was then used for only constructing imperial buildings, high palaces and royal forts. The wall of this amazing temple is 10 feet in thickness and are pierced in 2 stages. This majestic temple is created in eclectic style. This is believed that Lord Radha Vallabh idol is provided by Lord Shiva to ancestor of Atmadeva Brahman at mount Kailash where he went for worship and penance. Later, Goswami Hit Harivansh Mahaprabhu placed this idol on high cliff on the bank of Yamuna.

The ancestor of Atmadeva Brahman had performed penance at Mount Kailasha worshipping Lord Shiva. Lord Shiva was pleased and insisted that Atmadeva Brahman be blessed with his wish. Lord Shiva then gave him the idol of Shri RadhaVallabh Ji Maharaj from his heart and told him the method of its service. Shri Hit Harivansh Mahaprabhu carried this Idol, which on his arrival at Vrindavan was set up at 'Oonchi Thaur' (High Cliff) (Madanter) on the bank of the Yamuna.

Shri Radha is the main deity in this temple. Goswami Hit Harivansh Mahaprabhu was a blind follower and consider himself a servant of Radha Rani. He sings all praises and devoted himself in the service of Lord Krishna and Radha Rani.

Shri Radha is the main deity in this temple. Goswami Hit Harivansh Mahaprabhu was a blind follower and consider himself a servant of Radha Rani. He sings all praises and devoted himself in the service of Lord Krishna and Radha Rani.

One of the very interesting facts about this temple with regards to Nitya Seva is that there is no formal puja or prayer offered to Lord Krishna and Radha. Instead, a rigorous sewa (Service to Lord) is performed day and night based on the appropriate seasons and time. The deity here is conceived as living being and offer services just like one servant offers his services to his master. The deity here are offered the same luxuries and necessary things – like bathing, changing of clothes, offering of lord's favorite cooked foods, fruits, including retirement to rest in Sijja Mandir (which is sleeping room) along with other things.

According to the sects, there are eight important services which are offered regularly. And these are Mangla, Dhoop, Shringar, Rajbhog, Utthapan, Dhoop, Sandhya and finally Shayan. In morning, deity are placed in Nij Mandir where first aarti or prayer called Mangala Aarti is performed. After that door of Nij Mandir is closed for short period. Another aarti of the day is performed a short while later and this aarti is called Dhoop Aarti. And after that this temple remains open for devotees who come and offer prayers to lord.

While bathing the idol, the water poured on the deity, and it is called 'Charnamrit' which is later collected in a sacred pot and distributed among the devotees throughout the day who come to seek lord's blessing. This sacred 'Charnamrit' is very special and it link human soul to almighty lord.

The main festival of Radha Ballabh temple is performed for eleven day heralding the birth anniversary of Shree Hit Harivansh Chandra Mahaprabhu. Devotees perform dance and songs in memory of great lord and his follower. Shri Radha and Lord Krishna are carried on decorated chariot along with musical band and fabulous devotional songs performed by devotees. This rath-yatra, starts from temple, culminates at Raas Mandal, followed along side at main street. On the tenth day of this amazing festival, the deity at Radha Vallabh Temple is adorned and decorated in royal red cloths.

Devotees keep awake whole night and celebrate this occasion. Another grand festival is Shri Radha Ashtami festival which is performed nine-day long heralding the birthday of Shree Radha. In this festival also, chariot is decorated with beautiful flowers and lights. Various delicious and Mata Rani's favorite food like gujhias, ladoos, panjiree, rajbhog, rice and many others is prepared. Other annual festivals like: Janmashtmi, Holi, Deepawali, Annakoot, Sanjhi and many others are celebrated with great enthusiasm and devotion.

There is no entry fee to this temple and it remains open throughout the year. This temple remains open everyday between 5:00 am to 09:00 pm and timings of Darshans are as follows:

How to Reach Radha Ballabh Temple

This temple is situated at Gotam Nagar, Vrindavan (UP). This place is 12.3 km far from Chatikara and easily connected from Agra and Delhi.From Delhi, it is approx 150 km distance on NH2. At Chatikara, head south-east on NH2 turn toward Bhaktivedanta Swami Marg and turn left and just after straight road, on your left you will find Radha Ballabh temple. Tourists or visitors can take local buses, taxis, rickshaw and or cheapest shared autos for visiting Mathura and Vrindavan. Rickshaw ride will cost Rs 10 from Chatikara, Vrindavan.