Katyayani Peeth Temple, situated in the beautiful and peaceful town of Vrindavan, is one of the Shakti Peeths of India. Shiva Puran states that Daksh Prajapati, the father of goddess Sati, had organized a Yagya, in which he did not invite Sati’s husband, Lord Shiva because of his own ego. Sati went to this event uninvited. There she realized that her father and other gods were insulting her husband. Because of this she jumped into the fire. When Lord Shiva came to know of this, he was enraged. He went and destroyed the Yagya and took the burnt body of Sati and performed his famous Tandav dance. During which, the burnt parts of her body fell on various places. Those places are known as Shakti Peeth. It is believed that the goddess’s sacred hair fell here. Another versions of mythology are also there.

According to other versions, Katyayani is the Yogmaya power of Vishnu, whom he ordered to be born as the daughter of Nand and Yashoda, while he was born as Krishna to Devaki and Vasudev. Also, the Adya Shastra has established katyayani as the deity of Vrindavan, in its Adya Shloka, “Brijaya Katyayani para”. 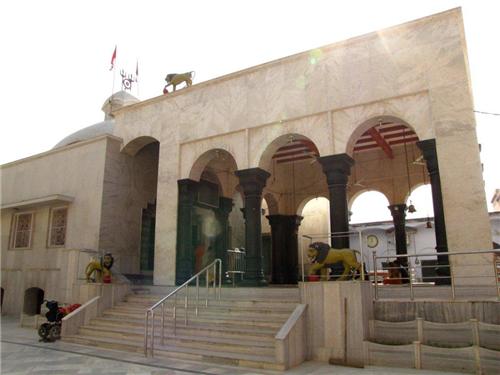 The main Katyayani temple was constructed in 1923. The temple was constructed by Yogiraj Swami Keshvanand Bramachari. Swami Keshavanandji spent about 40 years traversing the snow clad peaks and dales of the Himalayas meeting the existing masters under directions of his Guru Shri Lahiri Mahasay. There he had the vision and direction of the Almighty Mother to proceed to Vrindavan and perform the most important mission of his life by locating the Peethsthan mentioned in the Purans.

The most significant thing about this temple is that here five separate deities of the five sects, or sampradayas are worshipped. Each idol is worshipped by the sampradaya’s different worship methodology.

Structurally, the temple is beautifully constructed. The temple is built of white stone and is very large. The main prangan or hall of the temple is very spacious and airy. Which is very thoughtful, considering the usually hot climate and the crowd which gathers, particularly at the time of puja.

The Katyayani Peeth Temple does not only provide spiritual and devotional solace to the devotees. It also helps the needy. The managing trust of the temple runs various charity programmes. The major ones are-

Donations for the above causes can be made by cash, at the ashram, or alternatively, by money orders, cheques or Demand Draft in favour of ‘Shri Katyayani Trust’ and sent to:

Accommodation services are provided by Vrindavan Ashram of the Peeth. Otherwise, various hotels are situated near the temple. The nearest are-