In layman language, Imli Tala means, in the shade of the tamarind tree. Imli Tala Temple is one of the most renowned temples in Vrindavan, situated on the Parikrama Marg. Lord Chaitanya used to visit the Imli Tala at the bank of River Yamuna from Akura Ghat. A magnificent deity of Lord Chaitanya is placed under this tree now. It was a very unique relationship that Lord Chaitanya had with the sacred and holy place. As per the epics, it is said that this is the very same tree under which the Lord Govinda met to his beloved Radha. This was the favorite place for Radha Rani. 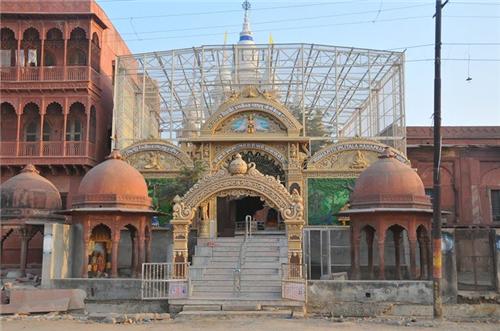 It is so said that when Radha and Krishna were with each other here and embracing, they had some distinguished feelings and they submerged within those divine feelings and forgot the world around them. Overwhelmed by the very charm of Radha they merged together as one, two souls one body into the great guru Sri Chaitanya Mahaprabhu.

Once during a dance called as rasa, Radha left abruptly and Krishna went immediately in her search. He looked for the beloved everywhere but could not find so he came and sat below the Imli tala tree. He started to turn golden as the skin of his beloved as he could not bear being away from Radha Rani. This was the moment when Radha came there and saw the miracle of Sri Krishna's holy body and took his darshan. Radha was astonished and question the Lord of this golden form. Krishna told her he was desperately searching for her and he felt sad due to separation and sat under the Imili tala chanting her graceful name. Due to this he started to have feelings like Radha and mood of Radha when separated. He also said that during the Kal Yuga he would take as per mood and Radha and distribute love and compassion of the Lord to all souls. 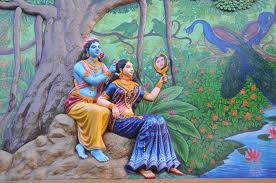 The devotees purchased the land and built a very beautiful temple of Gaudiya Matha. In the temple a yellow colored wall is surrounding tree and the tree is visible from the main door of the wall itself.

Almost 5,000 years later, Krishna again came in the form of Lord Chaitanya Mahaprabhu, the manifestation of Sri Krishna came and sat underneath this tree and chanted the divine name of Sri Krishna and had in his mind same intense feeling of separation from the Lord. So he was of the same complexion of the great Lord.

How to Reach Imlitala Mandir

Vrindavan is 10 km from the Mathura station, just north of the Seva Kunj is Imli Tala. Seva Kunj can be accessed from NH- 2 at the Chatikara turning.

It takes 25 minutes from the Mathura Station to reach here and is 14 kms approximately from Mathura
It is also close to the Radha Damodar Temple.