Vrindavan is located in Uttar Pradesh state and is pilgrimage centre for Hindus. It is the holy land of Lord Krishna who spend his life in company of gopis and Radha It is located 90 kilometers from Delhi and only 15 kilometers from Mathura. Surrounded with many temples big and small, one of this is the Govinda Dev Mandir located in the holy city of Vrindavan. The other name for this is Govind Deva Temple. 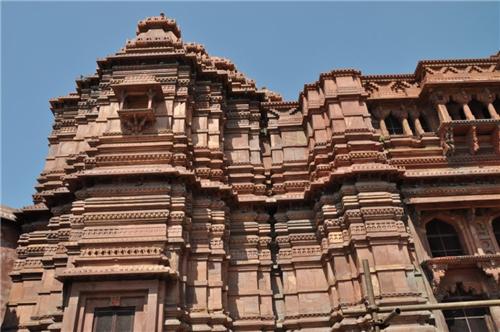 The story behind the deity of Lord Govinda is believed as follows, once Rupa Goswami was very sad and he was sitting on the bank of the Yamuna river and crying, he was calling out the name of Great Lord Chaitanya. Then it is believed he saw the great Lord Krishna dressed as a young brijbasi boy. He had conversation with him, the boy told Rupa Goswami that there is cow who came to graze to nearby hill and it emptied milk on a particular hole there. The young boy then took Rupa Goswami to the place on the hill to see what was in the hole on the hill. Reaching at the top of the hill the young boy disappeared.

Looking in the hole filled with milk, Rupa Goswami fainted as he couldn't believe what he went through. When he was conscious again he confessed to the local people who dug the ground and found deity of Govinda. All people shouted, “hey Govinda” which echoed the hill top.

It is also said that when Aurangazeb attacked Vrindavan, the deity was moved to Jaipur where one more temple is set up.

Raja Man Singh built this great temple in 1590, which is stated on the inscription on the temple, it is said that the complete inspiration behind this was the meeting with Rupa Gosvami. Great architectural aspects of India is clearly seen within this seven-storied temple.

There is one more temple behind this where the actual worship of the diety takes place. It was also used in the old era to carry out meetings for spiritual purpose. The temple is built on occasion of Akbar’s pilgrimage visit to the holy city of Vrindavan. It took a duration of 5 years to complete this monument, with thousands of workers and millions of rupees. The splendid work is seen on the walls of the great architecture. The first priest of the holy shrine, Chaitanya Mahaprabhu, is believed to be great devotee of Sri Krishna.

Building resembles to the Greek cross, with 100 feet in length and breadth. A great Lotus flower weighing tons decorate the hall. The great architecture has influence of all the western, Islamic culture. Usage of red stone, marble with gold and silver adding up to the magnificent beauty of this wonderful structure.