Vrindavan is a holy place where thousands of pilgrims visit to see the festivals, sites, temples and other devotional activities being conducted by the people. This town is known for the Radha Krishna temples and their activities that took place during the childhood of Krishna. There are several temples those were built in the ancient time and some are newly constructed. Both kinds of temples are greatest source of attraction of pilgrims from all over the world. 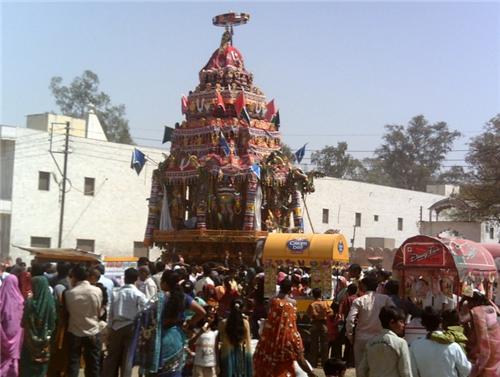 Apart from the above, this town is also famous for its unique style of celebrating festivals. The famous festivals are Janmashtami, Jhulan Purnima, Holi, Deepawali, the Brahmotsava festival and others. However, many more other festivals are celebrated here with great joy within the traditional framework of this place. People from all over India gather in large number to enjoy the same.

The Brahmotsava festival is the most important festival of Vrindavan and is enjoyed with delight and devotion. This festival is celebrated for ten days after the colorful festival of Holy mostly in February or March. There is a tradition to pull the rope by devotees on the day of Rath Yatra popularly known as Rath Ka Mela from the Rang ji temple to its garden and back to temple. The Brahmotsava starts from the first day of Chaitra Krishna Dvitya two days after Holi to Dvadashi. During this period every day the deity Thakur Godarangamannar (who is known to be the husband of Goda Devi) is taken out of temple till garden which is approx 600 meters from temple and back to the temple. The area is decorated all around from temple to this garden place.

There are several programs which take place during this period and special rituals have been performed in Vrindavan. Special rath yatra includes the main temple deity and the rath used in this holy journey is decorated with lots of precious things and costs million rupees. Every year some part of the rath is repaired or work is done to make it more attractive from the last year. The diety is carried with it, which is made of sandalwood and is about 60 feet high. The rath is specially surrounded by Brahmin guards and rope of the rath is pulled by the devotees and common donors. The duration of the journey is about 2 hours from temple to garden and back to temple. To make it more attractive and glorious lot of fireworks and lighting is done across the way.

The rath yatra during this festival is among one of the biggest rath yatra in the northern India and is the biggest festival for the people of Vrindavan. This period is regarded as golden time in the town of Vrindavan. People from all over the India wait for whole year to witness this golden moment with the family and near and dear ones. Whole town of Vrindavan glows in the light and looks like the Diwali night. The people should be updated with all required information to be part of this function as such they must know when this festival is being held and what norms and rituals are followed.